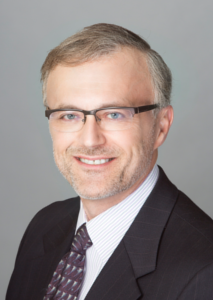 Bio
After earning his undergraduate degree at Purdue University, Dr. Tuchek completed a master’s degree in philosophy from the University of Illinois at Chicago then a Doctorate of Osteopathic Medicine at the Chicago Osteopathic Medical School. He interned at the Chicago Osteopathic Medical Center and completed his general surgery residency, chief surgical residency, and cardiothoracic and vascular surgery fellowship all at Loyola University Medical Center in Chicago. As a general surgery resident there, he received the prestigious Kaiser Award for outstanding contribution to surgical education.

Dr. Tuchek is a senior partner at Cardiac Surgery Associates, which is the largest practice of its kind in the United States. He is a Professor of Cardiothoracic and Vascular Surgery at Loyola University Medical Center where he directed the thoracic aortic stent graft program. Also at Loyola, he is the Surgical Director of the Structural Heart Program and the lead implanter/ principle investigator in multiple CoreValve Transcatherter Aortic Valve Replacement trials (TAVR). Dr. Tuchek continues to be actively involved in the heart and lung transplant program at Loyola despite his busy private practice at most of the major open heart programs in the western suburbs of Chicago, Northwest Indiana and Eastern Iowa.

Dr. Tuchek lectures internationally on topics ranging from ethics in medicine to minimally invasive heart surgery, percutaneous valve procedures, and aneurysm treatments. He also devotes some of his time teaching other physicians how to perform state-of-the-art cardiac and endovascular procedures around the United States. Dr. Tuchek is a consultant with numerous medical device companies helping to develop next generation medical devices in collaboration with other physicians and biomedical engineers.